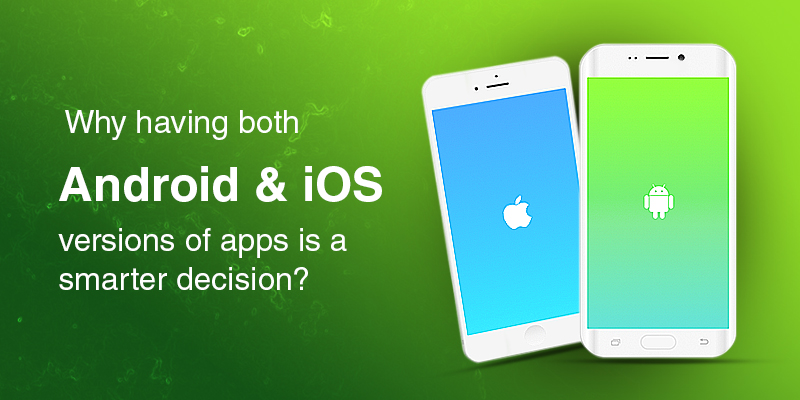 Why It Is Profitable to Develop Mobile Apps on Both iOS And Android Platforms?

Mobile apps having a presence on the Android platform as well as iOS platform have proved to be highly lucrative in the mobile market. Though, which platform is best, is always the topic of debate amongst masses. Yet, several businesses develop apps for both these platforms looking at their profitability. This is one of the reasons why iOS and Android app development has gained immense importance today.

Let us find out why having both Android and iOS versions of apps is a wise decision for any business.

Why are the Android platform and its apps are so popular?

The most important factor in favor of Android app development is its large number of user-base using the apps. As per Statista, a renowned online portal for statistics and market data, there were about 2.8 million apps most recently on the Google Play Store. So, a huge number of users await Android apps.

Android users have got a much wider choice for changing the settings of the apps and customize as needed. Also, the Android apps provide better notification features.

There are many other benefits that Android app development offers to developers. It is a flexible and customizable platform. It is an open-source platform and has low entry barriers comparatively; which is especially beneficial to small businesses and start-ups. Android apps don’t need any stringent approval process while making them live in the market.

It offers a better hardware choice and its devices are available in varying budgets suiting expectations of a wide range of audiences.

What are the advantages of the iOS platform and iOS apps?

The best mobile apps are usually first launched on the iOS platform. They are developed with high-quality standards to provide a flawless performance and an exceptional experience to the users.

iOS apps are highly secure. They are cushioned against malware and hacking. Due to all such reasons, they have a loyal customer base. The users are tech-ready and open-minded towards innovation and they get quickly adapted to the latest versions. Also, iOS apps provide better revenue.

iOS is a stable and refined platform where all the hardware and software is designed by Apple itself. This exclusive platform is quick and responsive. It follows strict guidelines and so, there are lesser chances of piracy. There is less device fragmentation in iOS app development. iOS can be a suitable option even for an iOS app developer who has less experience in development. Also, after the introduction of the Swift programming language, the tasks of developers have simplified to a lot.

Whether to go for Android or iOS app development depends on various factors like target customer age groups, the country or region of your targeted customers, etc. Also, if the target audience is from the higher-income category and if you are going to monetize from in-app purchases, then you would mostly go with iOS. But, if you are willing to target a broader market and think of monetizing through advertising, then Android will be a better choice.

However, both Android and iOS are feature-packed platforms and hold their importance in the mobile market. So, in this highly competitive business world, if one has to earn huge profits, developing an app on both platforms can be a wise decision.

Want to build Android apps, iOS apps or both simultaneously with hybrid development for your business? We, at Biz4Solutions, develop new-age custom mobile apps for both iOS and Android platforms. We can be your technology partner and develop scalable apps for you as per your business needs and target audience.

Popular Teeth Whitening Treatments to Select from that Suits You Best