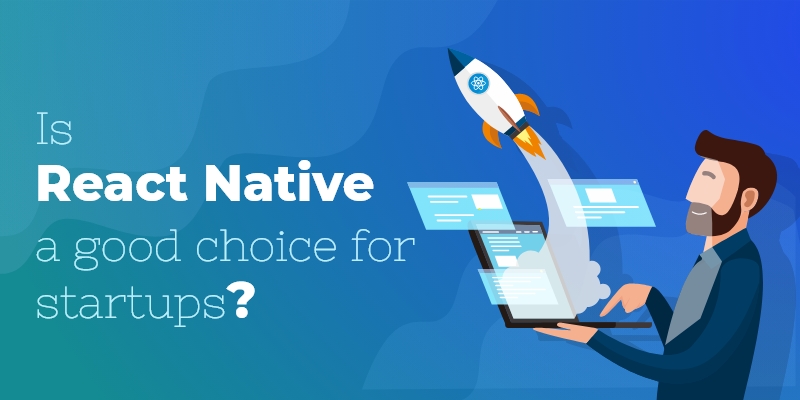 Why Should Start-Ups Go for React Native Mobile App Development?

While developing a mobile app, start-ups have the aim of reaching a wider audience at once and building a brand out of their product. Cross-platform app development allows the building of attractive mobile apps for multiple platforms using a single code-base and enabling start-ups to reach a large market in one go. However, in the past, when companies had to build an app, the only option was to build separate apps for different platforms. React Native framework is a functional cross-platform program for developing powerful apps for both platforms- Android and iOS. It has great potential for building innovative applications for different businesses. After the tremendous success of React Native, many businesses, especially start-ups prefer this framework.

Why choose React Native mobile app development for your start-up?

As we can see, many successful names in the business world have used React Native. It has already become a winning choice of many. Have a look at the positive potentials of React Native that benefit a start-up.

Budget-friendly: Using this framework, the developers can write a single code and run it on both platforms. It makes the work smoother and faster for React Native developers.  This reduces the development time by approximately 30-35%. It also reduces the cost to a great extent which is the best benefit to a start-up.

Faster time-to-market: React Native helps faster development of MVP version of the apps which is a plus point for start-ups. MVP version makes the basic product available in the market at the earliest for grabbing the attention of the investors quickly, thus giving a competitive edge to the app owners.

Better UI/UX: If compared with other frameworks like AngularJS, React Native looks like a JavaScript library and not as a framework. It provides a simplified and platform-specific user interface in mobile apps. Also, the apps are more responsive with reduced loading times. React Native uses third-party libraries for developers.

Enhanced Security: The apps built using React Native are difficult to hack. React Native uses JavaScript, which is the core programming language and the chances of errors are very less. So, these apps have high security and reliability.

Reusability of Native components: With this framework, start-ups can extend the functionalities of their apps by using native components like GPS, phone camera, maps, etc. It provides a Native UX feeling to the apps making them more useful and captivating. However, the developers should know about native development to leverage this benefit.

Availability of talented pool: As said earlier, this framework uses JavaScript, which is the most popular language. It is known to more than 67% developers, as per a survey conducted by Stack Overflow. So, there is a huge pool of talented developers available.

React Native is a promising option if you are looking for developing a cross-platform app for your start-up. You can have a great app in the market quickly and easily while being cost-effective. This framework has a vibrant ecosystem and works well in combination with other frameworks as well. It provides plenty of benefits that start-ups can leverage to get outstanding apps developed. Looking at this huge scope, many React Native app development services are popping up across the globe.

We can help to let your start-up grow and flourish!